skip to main | skip to sidebar

My name is Andrue Coombes, and I live in the State of Massachusetts. There are 298 towns and 53 cities in Massachusetts. It's my goal to visit each and every one of these places, take a picture of myself with the "Entering ___" sign, and interact with both the social and physical geography of the area. In this blog, I will write a story about my visit to each place, and things I did there, as well as post pictures and other things of interest. Hopefully I will complete this within the next few years, and everyone can notice how beautiful things can be in their own state if they just get out of and experience them! Good luck on all of your travels! 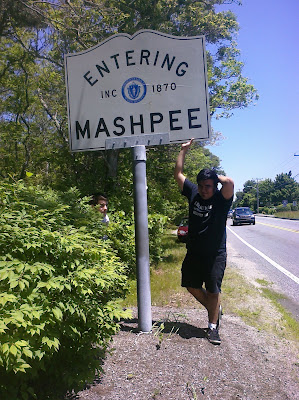 In the search for the elusive town of Gosnold, I came across a wonderful little town that I have been to before, Mashpee! Mashpee is a cozy cape town with a rich history. It is said that when Mashpee was settled in 1658, the missionaries that were there tried to coexist (somewhat) with the natives that lived there. Conflicts arose due to the fact that Europeans came in and sorta told the Wompanoags that they would only be able to live on a little square of land far away. The Native American pride still runs through this town as they have an Annual Pow Wow, which I believe I have once attended.

Mashpee is home the extremely expensive Mashpee Commons, which I think I may have once bought a Candy Bar at, but probably for about 12 times the cost of one at Shaws.

Mashpee is also home to the Mashpee Wompanoag Tribal Museum, which just this month, reopened to the public, after nearly ten years of being closed. It is located on Route 130 in Mashpee.

Also located on Route 130 is the 4-H Club Camp Farley, which I stayed at overnight for a week in 1999. While it would most definitely be rad to be outdoors in the wild now, when I was 8 years old, it was such a traumatizing experience! There were spiders on everything I owned, I fell down the side of a hill and hit some rocks resulting on a large scar on my knee, and I refused to change my clothes due to bugs. It was also the first place I ever heard a reference to Juggalos, which was quite bizarre as well. All in all, Mashpee is a fun place.


Fun Facts:
-Mashpee is the ONLY town on the cape that hasn't had a railroad running through it!
-The name Mashpee comes from the native name "mass-nippe" which means "Great" and "Water", a reference to Wakeby Lake!
-85 Percent of the Wompanoag People live within 20 miles of the Wompanoag Tribal Museum!
-Camp Farley both scared the crap out of me (literally, my parents had to bring me extra clothes) and made me realize that the outdoors can be fun if you know what to do. Thanks?
Posted by Andrue Coombes at 5:13 PM 7 comments: 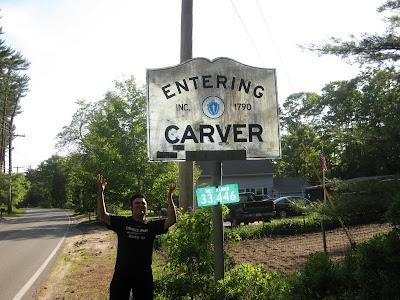 Alright, so I know I haven't been updating in a while, but I must start up again. Carver is a town bordering Plymouth. Carver is home to many awesome things! Including King Richards Faire, a totally rad Renaissance Fair that I went to a few times back when I was in High School. It's full of awesome entertainment, and a really expansive Renaissance experience. Theres giant turkey legs for sale, as well as period clothing and items. I should probably go back this year. In any case, King Richard's Faire is Located at 235 Main Street.
Carver is also home to the Edaville Railroad! It is whats known as a heritage railroad, which is a preserved railroad from the glory days of Rail Travel. I personally think trains are awesome, and I highly suggest paying a visit to Edaville if you dig old trains, or nice old fashioned amusement parks. If you wanna check it out, Its located at 5 Pine Street.
Carver is also home to an awesome pizza place called Santoro's that I once ate at with my mother. I love little pizza places, and this one is just great! Everyone there is super friendly, and would love for you to stop by! It's located at at 90 North Main St.
Carver has wide expanses of open fields, streams, and bogs all along the highway and streets. If you like quaint little towns that are a stones throw away from the ocean, check out Carver! Love Y'all!
Posted by Andrue Coombes at 2:00 PM No comments: 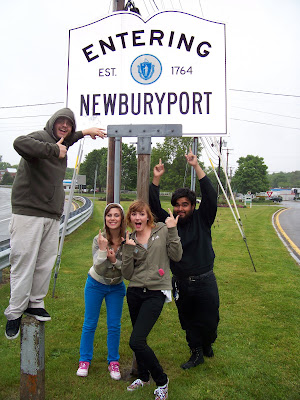 Newburyport was my favorite town in our excursion this time. It was such a nice little coastal town, with a very warm and inviting small town feel. We first went on the docks to look at the boats and ocean. Then we went over to the town center, where we came across a friendly police chief named Sargeant Reiss told us that his favorite restuarant was a place called Grog. Grog is a cool looking restuarant that serves sailors and townsfolk alike! We ventured to a wonderful little store called Richdales, which offered 25 cent hot dogs, and a whole lot of tourist items and other odds and ends. I really liked it there, and I hope that I can make my return sooner rather than later, when its sunny and warm! 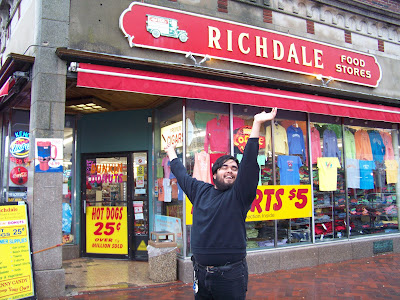 Posted by Andrue Coombes at 11:33 AM No comments: 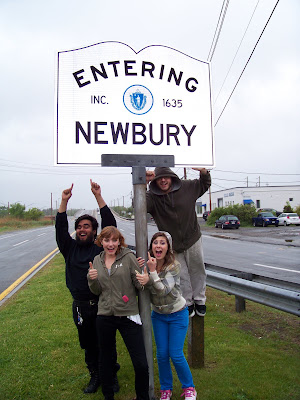 Newbury is an old town on the coast of the North Shore. It is mainly residential now with many beautiful antique houses, and views of the water. There are also abundant marshes, and very green areas. While driving, we passed by the Governor's Academy, which apparently, was originally called the Governor Dummer Academy. The school changed their name in 2006 to avoid taunts from other schools, and also to propell the schools name further and get more exposure. I think it's pretty funny that a school established in 1763 would have such a fuss over the name nearly 250 years later.
Posted by Andrue Coombes at 11:26 AM No comments: 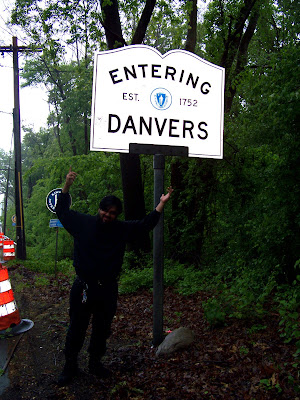 Oh Danvers! I was told to come here many times by many awesome people, and on this adventure, we spent the least amount of time here! Danvers is a town with a lot of history. Danvers was very involved in the Salem Witch Trials of the early 1690s, and the house of executed with Rebecca Nurse still stands to this day, and can be visited! Danvers is also known for its legendary "Danvers Lunatic Asylum" which I have been DYING to check out. It's supposedly built on the site of the house of John Hathorne, a judge during the Salem Witch Trials, and great-great-grandfather of Nathaniel Hawthorne, author of the House of the Seven Gables and the Scarlet Letter. I only passed through this time, but I plan on a full on visit to this town in the near future.
Posted by Andrue Coombes at 11:16 AM 24 comments: 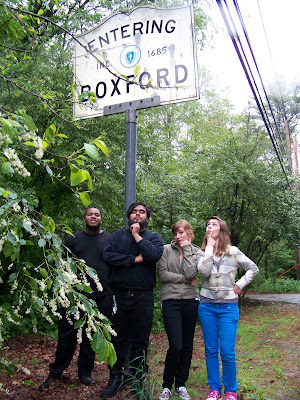 Boxford is a town nestled in the forest, filled with cute, old houses, and people! It is home to the Tyler Homestead, also known as WITCH HOLLOW FARM! The Tyler Homestead is a very famous haunted house, where a supposed witch from Boxford named Rebecca Eames said she was bewitched near. It's also home to the Boxford Community Store, known as "Jack's" or "Wayne's" depending on who you ask. Boxford is a small little town with a very decentralized population, the kind you see out in western Massachusetts. We stopped on the side of the road next to the river to take this picture, and we were terrified of the traffic coming up so closely! The sign here, if you can tell in the picture, is an old wooden town sign, as opposed to the newer metal ones. You can tell by the significant wear and tear on both sides.
Posted by Andrue Coombes at 10:57 AM No comments: 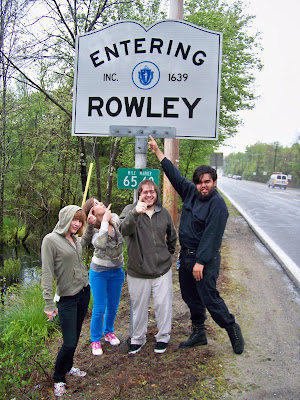 Rowley is a nice little town on the North Shore with a lot of history. It was settled as a plantation for a few families. This place, I think is pretty cool, because it's supposedly right next to Innsmouth in the famous H.P. Lovecraft story "The Shadow Over Innsmouth". It's a pretty rad that this town borders the ruined, decrepit, Cthulu-loving town of Innsmouth. Rowley was rather quaint as well, and I learned of a diner there called the Agawam Diner. Now being a fan of diners, and food, I will eventually have to make a stop here and interview the workers. This diner is famous for its food, and history. Elvis Costello even shot the video for his song "45" here! What a lovely little town!

Elvis Costello "45" (Diner Version) - http://www.youtube.com/watch?v=esTuz55bQe0
Posted by Andrue Coombes at 10:47 AM No comments: